5 things you must know about Samsung Galaxy Note 10 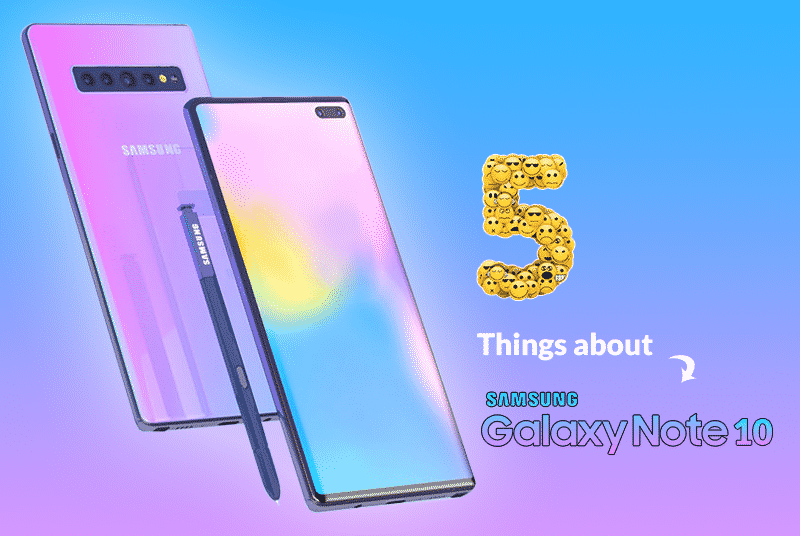 5 things you must know about Samsung Galaxy Note 10

Samsung has been the leader in the smartphone industry. There was a time when no other phone manufacturer was able to break the market share that Samsung held. But things have changed with time and for good. Samsung has moved from the lower segment in smartphones and has been focusing majorly on high-end smartphones. With its Galaxy series, there is nothing much to explain as the results and reviews say it all. But there is a lot to say about the new Samsung Galaxy Note 10. So, let us take a sneak peek in the world of Samsung Galaxy Note 10 to know the top 5 things about it.

There are lots of buzzes around in the market about the Samsung Galaxy Note 10 and its release date. Just like each year, Samsung has started to own its slot of August as the month of release for most of its high-end phones. It could probably be to break the market of Apple as they follow the next month. It is to lure in the eager customers, but the fight between Android and iOS is evident as there are separate buyers for it. So, if you are really into buying the Samsung Galaxy Note 10, then you would probably need to wait for the release date which could be around August.

The usual price of Samsung Galaxy Note 9 should be the base and keeping this in mind; the company could expectedly start from a range of £929 to about £999. It would give you a thought about the budget, but for a price like this, there is a lot in store for you. Samsung has never broken its promise in terms of delivering masterpieces for customers, and it is still doing its best.

Looks are always the point of discussion when a new phone is released. All the users wish for a sleek yet classy design that would compliment them. This time, Samsung has been focusing on the looks even more by planning to get a flatter screen with great aesthetics. Samsung has been thinking much on the design and the looks for the larger segment who wish for a smartphone but not as big as they have gotten lately. Rumours are that Samsung would come up with two versions of the Samsung Galaxy Note 10 where the second version would be smaller in size to cater to the needs of the people who wish to use smaller and less bulky phones.

The screen size has been going bigger with every new release. Though Samsung Galaxy S10 has come up with the largest screen size ever with 6.7 inches, it does not seem like it would cross the limit and give a bigger screen instead. The reason being that it would not make sense to reduce the size of the hone for one set of customers and increase it on the other hand for others. But you never know what Samsung has in mind, and this would reveal once the phone hits the shelves. Though it would not leave the Quad HD Dynamic AMOLED panel for sure as it has created waves that no one would try to break unless for better.

Power is an essential aspect of such a high-end smartphone. It would not be lesser than 8 GB and go up to 12 GB as this is what is doing the rounds in the market. But its quite early to comment on this part. However, the camera is going to be quite interesting as there is fierce competition among other manufacturers. A simple 12 MP camera with wide-angle lens and a 16 MP lens with ultra-wide feature should do the bit. But for now, it is time we settle to the current versions as they are outstanding and can-do wonders for all the users.

With so much to know and digest, the rumours do more of harm but keeps us at a nail-biting edge until August this year. The discussions would not stop, and you would get a lot of updates fake or real. You decide to go by your instinct as you may be proved right within a couple of months for use.